A thrice-weekly newspaper's watchdog reporting about local-government support of two secretive energy projects got physical this week, as the county's energy and development director punched an editor in the arm, according to a story in today's Appalachian News-Express of Pikeville, Ky. The criminal complaint by News Editor Chris Anderson said Charles Carlton "approached me and hit me with a closed fist in the left arm above the elbow" as he opened the newspaper's front door for Carlton, who said, "You son of a bitch; what are you people harassing me for?" 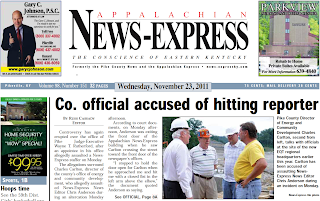 "According to court documents, Anderson said the incident occurred shortly after he had sent an open- records request to Pike [County] Judge-Executive Wayne T. Rutherford’s office, which would have been forwarded to Carlton for fulfillment," News-Express Editor Russ Cassady wrote. His story said Carlton issued a statement repeating a denial that he hit Anderson, but said "It was a reaction through frustration because it seems every time I spend considerable amounts of time and energy negotiating with large national and international companies the newspaper intervenes at critical moments and makes it very difficult for me to get anything accomplished."

Cassady wrote that Carlton "has been at the center of controversy since late last month, when the News-Express released the results of an investigation of a pair of coal-to-liquid fuel plants proposed for Pike County. Carlton, in his capacity as director of energy and community development, figured heavily in both the projects and in the News-Express investigation, which found that the county may have illegally provided equipment and labor to a private company working on private property." For that story and two sidebars, click here.

Today's story notes, "This incident is the second in less than two years in which a News-Express staffer was involved in an altercation regarding a news story." In the first, Pikeville Mayor Frank Justice hit former editor Jerry Boggs in the face and later issued a public apology. The online News-Express is subscription-only, but the pages containing today's story are posted here and here.
Written by Al Cross Posted at 11/23/2011 01:20:00 PM