Rural station, 'glue' for Eastern Kentucky, is being undermined by satellite television and its rules

A rural television station that has created a stronger regional identity and connections among isolated counties in Eastern Kentucky is being undermined because "a combination of federal regulations and business decisions keep WYMT off satellite," reports Ivy Brashear, a graduate assistant for the Institute for Rural Journalism and Community Issues, publisher of The Rural Blog.

"As people in Eastern Kentucky increasingly choose satellite TV, the number watching WYMT decreases," writes Brashear, a former reporter for the Hazard Herald, a weekly newspaper in the same town as the station. “It’s the glue that sticks the Eastern Kentucky counties together,” U.S. Rep. Hal Rogers, a Republican whose 5th District includes all 24 counties the station reaches, told Brashear.

WYMT is not on satellite because "Satellite companies don’t have to carry more than one affiliate of a network in a market, and WYMT and its parent, WKYT of Lexington, are both CBS affiliates," and because their parent company, Gray Television, has been unable to get Direct TV or Dish Network to budge, Brashear writes. The situation is complicated by the station's location at the far end of the Lexington TV market and near three other markets. Here's a map; for the full story, click here. 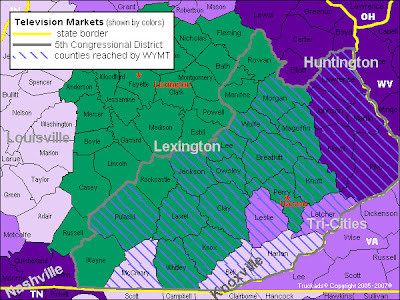 you can see how nutty that map is. I live in Letcher Co and get stuck with east TN stations on DirecTV. It makes no sense to put Letcher, and especially Leslie, in that market when our politics, sports, and shopping (mostly) is in KY