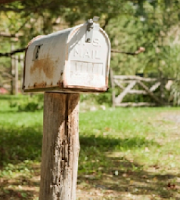 When it comes to restructuring the U.S. Postal Service, Emily Stephenson of Reuters reports, the creators of the cost-cutting House bill that offers a dramatic slashing of rural mail service are having to deal with outspoken rural lawmakers. In a rare display of agreement, legislators from both parties said if the sponsors want their bill to pass, they will have to work with rural members -- many of whom feel that Rep. Dennis Ross, a Florida Republican who co-sponsored the bill with Oversight Committee Chairman Darrell Issa (R-Calif.) did nothing to address their concerns before writing provisions that would end Saturday delivery and close rural offices.

"Given the fact that there was no discussion to start with, and a draft bill got written without any interaction with any people whose districts would be severely impacted, it's about time, isn't it?" said Rep. Jo Ann Emerson, a Republican who said her Missouri district's largest town has about 35,000 people. "I hear concerns from pharmaceutical companies because they have mail-order drugs. Certainly the newspapers to our rural communities, all of those newspapers get mailed. . . . It really does change the way that we communicate with people," she said.

"The timing is tricky," Stephenson writes. "Members of Congress want legislation to help the service avoid default on two payments totaling $11.1 billion to the federal government before the Nov. 6 elections, which could quiet talk that a taxpayer bailout of the USPS could be needed. But lawmakers in tough races, particularly in rural areas, do not want to have to defend voting for legislation that could lead to the closure of post offices in their districts." (Read more) The Senate has passed a bill that would guarantee Saturday delivery for two years, and the postal service has backed off its plan to close thousands of rural offices, reducing their hours instead.
Written by Amy Wilson Posted at 6/04/2012 04:00:00 PM