UPDATE, June 8: From 1994 to 2010, research and development expenses in the private sector to improve agricultural production increased by more than 40 percent in inflation-adjusted dollars, USDA's Economic Research Service reports.

The gap between federal support for agricultural research at large public universities and private investment continues to widen. A new research report suggests that the divide may mean an increased threats to academic freedom and more potential for corporate meddling in the once-independent university lab.

Alan Scher Zagier of The Associated Press reports, "A recent study shows that nearly one-quarter of the money spent on agricultural research at land-grant universities comes from corporations, trade associations and foundations, an all-time high. Financial support from the U.S. Department of Agriculture accounts for less than 15 percent, the lowest level in nearly two decades." Here's a graph showing the trend: 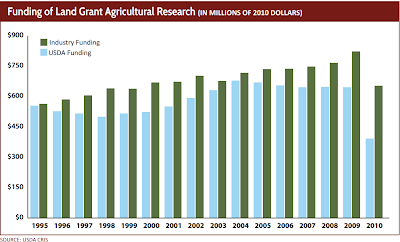 Zagier says the report by Food and Water Watch, a Washington-based environmental group, is "rife with what it calls examples of how corporate money 'corrupts' the public research mission at land-grant schools, which were created by the Morrill Act of 1862 (which will be 150 years old July 2). The examples range from a University of Georgia food-safety program that allows industry groups to join an advisory board in exchange for annual $20,000 donations, to an Ohio State University professor whose research on genetically modified sunflowers was blocked by two seed companies after the initial results suggested the sunflowers fostered the growth of weeds.

"The report, entitled 'Public Research, Private Gain,' also explores the blurry lines created when universities and industry work together, such as when South Dakota State University sued farmers over wheat-seed patents as part of a public-private coalition formed with a Monsanto Co. subsidiary. The company is known for aggressive litigation against what it calls seed piracy. Kansas State University, Colorado State and Texas A&M have pursued similar lawsuits," Scher Zagier reports. "Such alliances are a far cry from land-grant universities' historic role in promoting public knowledge and freely sharing the fruits of their research," said Patty Lovera, Food and Water Watch's assistant director.

Deans at several agricultural colleges said corporate support is vital but would be unlikely to sway research results or even influence what research gets done. "We're kind of caught between a rock and a hard place," said Thomas Payne, dean of the College of Agriculture, Food and Natural Resources at the University of Missouri. "In order for research to continue, we have to have support from a variety of sources." With the current five-year Farm Bill set to expire, AP notes, Food and Water Watch is lobbying for a boost in federal investment "in campus agricultural research, with more resources steered toward sustainable methods, organic farming and reduced use of pesticides. The group also is calling for land-grant universities to more fully disclose gifts by private donors and wants agricultural research journals to adopt more stringent conflict-of-interest rules, similar to the recent crackdown by medical journals." (Click here to download the report.)
Written by Amy Wilson Posted at 6/08/2012 12:30:00 PM