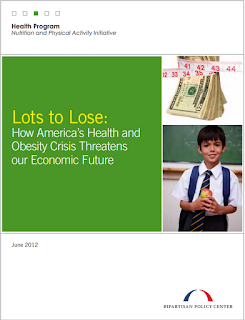 Four former secretaries of heath and agriculture and the Bipartisan Policy Center have released a lengthy report aimed at the nation's obesity epidemic. With 26 recommendations, the report promotes public and private sectors working together to create healthy families, schools, workplaces and communities.

The report, called "Lots to Lose," recommends extending federal guidelines for diet and physical activity to all children under 6 years old, along with offering more support to promote breastfeeding. "Learning to be active and staying active is a critical piece of the puzzle," said Republican Mike Leavitt, former secretary of health and human services and former governor of Utah. "Government has a role to play, but it is not the answer."

"If you think this is fluffy stuff about diet and exercise or about creating a nanny state you are wrong," said Dan Glickman, who was a Democratic congressman from Kansas and agriculture secretary under Bill Clinton. "Americans like silver bullets to solve problems. This one requires silver buckshot."

Former agriculture secretary Ann Veneman, a Republican who served under George W. Bush, spoke of the importance of good nutrition during the first 1,000 days of a child's life. "Improving health outcomes early in life is a critical element in helping to shift our current health care system toward prevention," she said.

Democrat Donna Shalala, president of the University of Miami and health secretary under Clinton, also participated. While The Washington Post's Janice D'Arcy called the report "an earnest and comprehensive effort," she asked, "Haven't we been down this road before?" For the report, click here.
Written by Al Cross Posted at 6/08/2012 06:30:00 PM