The Congressional Connection Poll on federal issues has "found strong support for either increasing or keeping spending about the same for subsidies to farmers and agribusinesses to help guarantee that prices for their crops don’t fall too low," National Journal's Matthew Cooper reports. "Thirty-nine percent of the public wanted the amount spent on such subsidies to go up, while 37 percent wanted it to stay the same. Only 19 percent wanted to see cuts, a significantly lower percentage than the 32 percent who wanted to see food stamps cut." Food stamps are part of the proposed new Farm Bill, now on the Senate floor.

"The public showed enthusiasm for increasing the amount spent to promote local farmers’ markets, roadside stands, and other direct sales from producers to consumers," Cooper writes. "A near majority, 48 percent, wanted more money spent on this, while only 15 percent wanted such funding cut. Thirty-two percent wanted it kept about the same. The bill that was voted out of the Senate Agriculture Committee included expanded funding to help farmers sell directly to consumers."

Here's a look at the breakdown by political affiliation (National Journal chart; click on image for larger version): 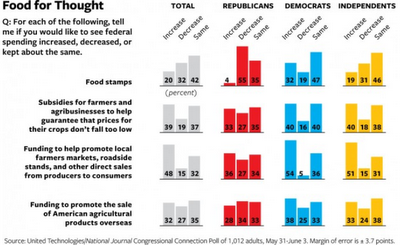 The poll was sponsored by the National Journal, a magazine noted for its nonpartisanship. Cooper notes that a poll taken recently by the W.K. Kellogg Foundation of Battle Creek, Mich., "found that 80 percent of the public says Washington should do more to increase access to locally produced food. Although the question was worded somewhat differently than the one posed in the Congressional Connection Poll, the results suggest that these programs may have a political constituency waiting to be tapped." (Read more; tip of the hat to the Daily Yonder)
Written by Al Cross Posted at 6/05/2012 03:50:00 PM