Oil makes North Dakota boom, but at some cost to the environment 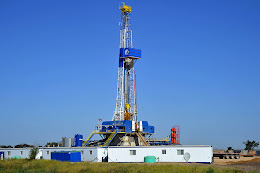 ProPublica, an independent investigative news operation, reports that oil companies in North Dakota have documented "more than 1,000 accidental releases of oil, drilling wastewater or other fluids in 2011, about as many as in the previous two years combined." (Photo by Karen Bleier)

Nicholas Kusnetz writes, "Many more illicit releases went unreported, state regulators acknowledge, when companies dumped truckloads of toxic fluid along the road or drained waste pits illegally. State officials say most of the releases are small. But in several cases, spills turned out to be far larger than initially thought, totaling millions of gallons. Releases of brine, which is often laced with carcinogenic chemicals and heavy metals, have wiped out aquatic life in streams and wetlands and sterilized farmland. The effects on land can last for years, or even decades. Compounding such problems, state regulators have often been unable — or unwilling — to compel energy companies to clean up their mess."

Under North Dakota regulations, Kusnetz notes, the agencies that oversee drilling and water safety "can sanction companies that dump or spill waste, but they seldom do: They have issued fewer than 50 disciplinary actions for all types of drilling violations, including spills, over the past three years." Mark Bohrer, who oversees spill reports for the state Department of Mineral Resources, which regulates drilling, told Kusnetz that the number of spills is "acceptable given the pace of drilling and that he sees little risk of long-term damage." Oil companies are drilling upwards of 200 wells each month in northwestern North Dakota, an area roughly twice the size of New Jersey, and the state now ranks second in production. The work has reinvigorated North Dakota's economy; unemployment sits at 3 percent, reversing a population decline that began in the mid-1980s, when the last oil boom went bust.

But there's always a downside. Micah Reuber, former environmental-contaminant specialist in North Dakota for the U.S. Fish and Wildlife Service, said he quit after growing increasingly frustrated with inadequate resources; responding to oil field spills was supposed to be a small part of his job, but it came to consume all of his time. He said no agency, federal or state, has the money or staff to study the effects of drilling-waste releases in North Dakota. Kris Roberts, who responds to spills for the Health Department, said that the state does not have the manpower to prevent or respond to illegal dumping. North Dakota's legislature has passed a few regulations this year, including a rule that bars storing wastewater in open pits. Still, writes Kusnetz, "advocates for landowners say they have seen little will, at either the state or federal level, to impose limits that could slow the pace of drilling." (Read more)
Written by Amy Wilson Posted at 6/08/2012 02:33:00 PM

Ive seen mishaps in Texas where the disposal water spilled across the land. What was left looked like a dried up sea with dry salt everywhere. Huge care must be taken when doing these projects, however I have seen rigs in the middle of crops with no damage at all.