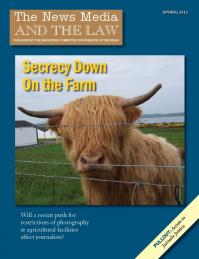 The recent rash of state legislation "designed to curb undercover recording at farms and other agricultural facilities may potentially restrict reporters’ ability to gather and publish important information about the food industry," Kristen Rasmussen writes for the spring edition of The News Media and The Law, the quarterly magazine of the Reporters Committee for Freedom of the Press.

"Some of the measures would directly prohibit journalists from photographing or recording farm animals and other items and activities involved in food production in a manner not likely to pass constitutional scrutiny," Rasmussen writes. "Others, however, seek to cut off the dissemination of this information at its source, by criminalizing the actions of whistleblowers. Although the laws and proposed laws differ in the types of activities they criminalize, all are at the center of a legal controversy that pits agricultural interests against those of journalists, activists and employees."

Reporters Committee Executive Director Lucy Dalglish said, “It’s one thing to prohibit trespassing on private property, but regulating legal activity on public land is a very scary trend and most likely wouldn’t pass constitutional muster. These laws also put a severe chill on those who would expose any wrongdoing on farms that could harm the nation’s food supply and health.” (Dalglish is leaving the RCFP to become dean of journalism at the University of Maryland.)

Rasmussen's 2,300-word story is a comprehensive look at the issue, and is accompanied by a description of each "ag-gag" law in Iowa, Kansas, Montana, North Dakota and Utah and the unsuccessful legislation in Minnesota, Missouri and New York.
Written by Al Cross Posted at 6/07/2012 05:23:00 PM

Perhaps the Rasmussen ought to look at the law as it evolves and is improved in other states. The law in Missouri - SB 631, simply states- Under the act, employees of animal agricultural operations who videotape what they suspect is animal abuse must provide the recording to a law enforcement agency within 24 hours. Any such recordings must not be edited in any way. An intentional violation of the act is a Class A misdemeanor.
I see no way that this will interfere with any valid photography by anyone.
The key words in the article are "may potentially". With altered and falsified videos released months after the event and no proof of where they were taken, the potential to destroy someone's reputation and livelihood are much greater than the potential to stop a valid reporter.