County unemployment numbers for April, just out, continue to show some job growth in rural areas

The Daily Yonder's Bill Bishop reports that unemployment in rural America continues to fall with the average unemployment rate in rural counties at 7.7 percent in April. The jobless rate in counties that are near metropolitan areas but are largely rural in character declined to 7.2 percent. Both of these percentages were below the 7.8 average seen in metropolitan counties that month. The figures on county unemployment were just released by the Bureau of Labor Statistics. (Read more) 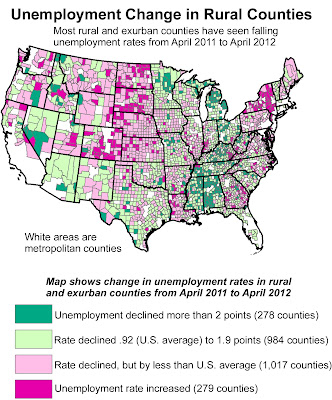