This year marks the 40th anniversary of the Rural Development Title, a section of the Farm Bill that outlines development spending in rural areas. It has continuously been threatened with budget cuts, and remains threatened in this year's deliberations over the farm law. For the Daily Yonder, Timothy Collins, director of research, policy, outreach and sustainability at the Illinois Institute for Rural Affairs, provides some history about the title and its importance to rural America.

The roots of the title can be traced to Franklin Roosevelt's post-Depression efforts to rebuild the country, but a bipartisan title wasn't included in the Farm Bill until 1972. "This was a watershed event," Collins writes. "It was an effort to bring together diverse programs that helped rural areas and moved rural development under the umbrella of the U.S. Department of Agriculture." The title was also a shift from the War on Poverty, which focused mainly on urban areas, to "a more clearly defined" rural development policy, Collins writes. 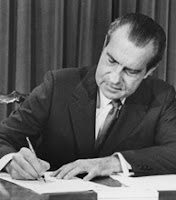 After Richard Nixon, right, took office in 1969, he appointed the Task Force on Rural Development to develop a report about rural policy. The report "connected rural and urban well-being, mainly focusing on helping rural communities slow the migration to cities and develop community leaders. It also stated that rural development couldn't happen unless local communities actively worked for it. Nixon wanted to "reshape federal-state relationships" and give rural communities more flexibility in how they used federal funds, David Roth writes in "The Nixon Administration Through Passage of the Rural Development Act of 1972."

The 1972 Farm Bill included loans for commercial and industrual development in rural areas; insured and guaranteed loans, instead of direct federal loans, to press the private sector into playing a role in rural development; cost-sharing provisions; and, improvements in the administrative machinery of the Farmers Home Administration. Rural Development became a named section of USDA. (Read more)

Collins reports the USDA is taking "particular pains to tell its story and point out where its Rural Development programs are working" because the title is struggling under budget cuts and has been threatened with more. To learn more about the "success stories," click here.
Written by Ivy Brashear Posted at 8/28/2012 11:03:00 AM