Who wins in W.Va. when big surface coal mine comes (too?) close to adventure tourism sites?

Perched on the rim of the New River Gorge and a short drive from the Gauley River, a major whitewater stream, Fayetteville, W.Va., is one of the country's top outdoor destinations. But before its reincarnation as an adventure mecca, Fayetteville suffered the boom and bust of both timber and coal. Jesse Wood of Sierra Magazine writes that rafters, canoeists, kayakers and cliff climbers have "transformed the local economy and revitalized the area."

Now Frasure Creek Mining is proposing a major expansion of its mountaintop-removal coal operation in the center of Fayette County. Those who make their living in sustainable tourism fear the worst, Wood reports. After all, it seems like a hard-luck deja vu to many of them. When major underground mines shut down, said Clif Bobinski, "tourism seemed like the new way to try to make it and stay. Now a lot of restaurants are dependent on that business." The influx of outdoor enthusiasts has influenced Fayetteville's culture in other ways as well. Before the tourism boom, many downtown storefronts stood vacant; now they house a yoga studio, a bead shop, art galleries, multi-ethnic cafes, and numerous biking, climbing, and whitewater shops. The national Boy Scout Jamboree is expected there in 2019. 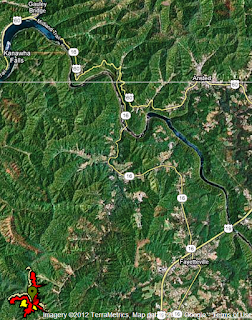 (Map from Plateau Action Network shows Fayetteville and New River Gorge bridge on US 19 at lower right, and new mine area at far lower left; click on map for larger image)
Some worry now whether the crowds will continue to flock to an area scarred by an enormous strip mine. The project would cover 3,662 acres and create 20 "valley fills" for the mountaintops leveled to reach the coal. Blasting can already be heard within the gorge, sometimes several times a day; the strip mine is visible from high spots; and Fayetteville's outdoor community isn't trusting the coal industry to "do it right," Wood reports. Kenny Parker, co-owner of an outdoor-gear shop co-owner, "emphasizes that he's not against coal miners," saying: "Everybody's father and everybody's grandfather was a coal miner. You respect that because that is their heritage. I understand that. But like it or not, coal is not going to rule the day in Fayette County." (Read more) For Catherine Moore's story in The Register-Herald of Beckley about approval of the permit, click here.
Written by Amy Wilson Posted at 8/27/2012 01:16:00 PM