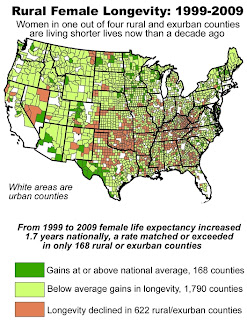 The life expectancy of the average U.S. female increased 1.7 years from 1999 to 2009 -- 79.6 to 81.3 years.  Good news on the whole, but Daily Yonder reporters Bill Bishop and Robert Gallardo went a little farther in their analysis of the data provided them by the Institute for Health Metrics and Evaluation at the University of Washington. They found that rural women hardly keep up and some have even lost ground in the last decade while their urban sisters are obviously gaining from widespread health advances.

Bishop and Gallardo report "that the solid gain in longevity was matched in only 168 rural or exurban counties, or 6.5 percent of all the counties outside the cities." That is, while women in most of the nation were living longer lives, in many rural counties -- some 622 of them, in fact -- their longevity shortened in the same decade. The 622 represent some 24 percent of rural counties and exurban counties (counties in a metro area where more than half the county population lives in rural census tracts), women lived shorter lives in 2009 than in 1999. (You can see a similar map and charts for rural men here.)

As the Daily Yonder reporters point out, "in more than 95 percent of rural and exurban counties, changes in female longevity in the last 10 years failed to match the gains experienced in the rest of the country." The largest decreases in female life expectancy between 1999 and 2009 were clustered in Oklahoma, Eastern Kentucky, West Virginia, Alabama and Georgia. (Read more)
Written by Amy Wilson Posted at 8/29/2012 02:30:00 PM