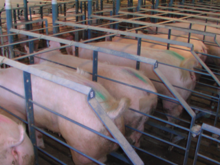 The Humane Society of the United States has bought shares in four major financial services companies in a bid to use shareholder pressure to force two of the nation's largest pork producers to stop housing pregnant sows in gestation stalls. The animal rights group said that its small investment is large enough to introduce proposals during shareholder meetings. The group, reports P.J. Huffstutter of Reuters, has successfully used such shareholder advocacy in the past to pressure food and agriculture companies to change corporate buying habits and production practices. (Wikipedia photo)

"By not changing over to alternative animal housing, claims the group, Tyson Foods Inc. and Seaboard Foods are putting their lucrative contracts with these customers at risk," reports Huffstutter. "McDonald's, the nation's top hamburger chain by sales, vowed in May that its U.S. business would only buy pork from farmers and other sources that do not use gestation stalls for housing their pregnant sows by 2022. Such stalls are used to confine sows during the breeding and post-birth process."

Seeing little success from the producers, "the Humane Society decided to a less-direct route and press its case with Tyson investors: JP Morgan Chase, , the biggest U.S. commercial and investment bank by assets; BlackRock, the world's biggest asset manager; Jennison Associates, a subsidiary of Prudential Financial, the second-largest U.S. life insurer; and Ameriprise Financial, a financial services company," Huffstutter reports. Tyson told her in an email that it is committed to humane animal treatment at all stages of food production, and expects the same from those farmers who supply products to it. Seaboard, the nation's third-largest pork producer, could not be reached for comment. (Read more)
Written by Amy Wilson Posted at 8/31/2012 03:23:00 PM