Data show each county's number of uninsured, how many would benefit from Medicaid expansion

The U.S. Census Bureau released data this week showing 2010 estimates of health insurance coverage for all 50 states and each of the nation’s counties. The data are exactly what journalists need to do their own stories about the problem of the uninsured and the potential impact of Medicaid expansion under federal health reform. 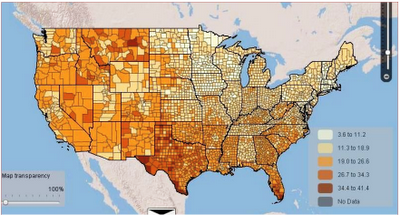 The Census Bureau press release has a link to the map above and to a list of every U.S. county with estimates of the number of people who would be covered if Medicaid were expanded to 138 percent of the poverty level.

Laura Ungar of The Courier-Journal in Louisville used the data to show what parts of Kentucky and Indiana have the most uninsured and which would benefit most from Medicaid expansion. The greatest area of need in Kentucky was in the state's south-central region which is part of Appalachia but has no coal. Ronald Wright, judge-executive in Casey County told Ungar that his hilly county depends largely on industries such as timbering and farming, and many residents don’t have employer-sponsored health coverage. “I don’t know how we correct it,” Wright said. “Most people just can’t afford (insurance). It’s getting so expensive.” He said the uninsured often seek care in emergency rooms that can’t turn them away or at the local health department, which “is always busy.” (Read more)
Written by Amy Wilson Posted at 8/31/2012 03:40:00 PM