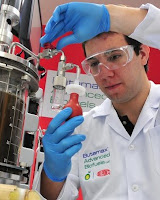 Some ethanol refiners in the Corn Belt are considering switching to butyl alcohol. Butanol is more attractive to refiners because it has some advantages over ethyl alcohol: It produces more energy, is easier to handle, and more of it can be blended into a gallon of gasoline. But producing it will take costly retrofits at ethanol plants. (Photo: Butanol production)

Several companies, including Butamax Advanced Biofuels, ajoint venture of  BP and DuPont, have developed ways to make butanol the same way as ethanol, through yeast fermentation and distillation. Butamax CEO Paul Beckwith told Henry Fountain of The New York Times that making butanol that way should be attractive to ethanol producers because they won't have to adopt a new production method. He also said new butanol-specific plants could be built, including some that use switchgrass or other nonfood raw materials similar to cellulosic ethanol plants.

Ethanol producers are wary, though, saying they prefer to talk with gasoline companies before making the switch. Highwater Ethanol CEO Brian Kletscher told Fountain that the company sees potential in butanol production, but he wants to talk to gas refiners before making a final decision. Butamax estimates that converting a small ethanol plant to butanol could cost $10 to $15 million. (Read more)
Written by Ivy Brashear Posted at 10/25/2012 11:49:00 AM