In the state that once had the highest immunization rate, Vermont's medical community is not so proud of anymore. Fewer people are vaccinating their children in the nation’s most rural state, reports Dr. Wendy Mahoney, a private practioner in the state. But Vermont isn't alone. Stories about declining immunization have come in from across rural America, Mahoney writes in the Daily Yonder, and they "come in the midst of a pertussis outbreak the likes of which Vermont has not seen in years, if ever." Pertussis is whooping cough.

Mahoney says she can find one reason for the recent outbreak: a new law in her state, like some in other rural states, that allows parents to exempt their children from required vaccinations "because of a personal, moral, or other belief." Mahoney says many rural residents use the exemption, which she finds hard to fathom in the face of scientific advances that prove that vaccination has ended smallpox, wiped out polio in most of the world, and controlled measles, rubella, tetanus, diphtheria, influenza type b and other infectious diseases. 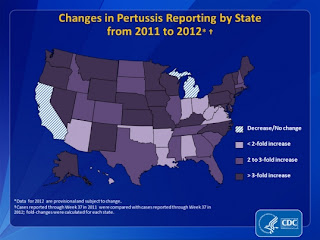 The top map shows the estimated percentage of children enrolled in kindergarten who have been exempted from receiving one or more vaccines in the 2011–12 school year. Comparison with the other map shows that states with large numbers of exemptions are those where whooping cough is making a comeback. (Centers for Disease Control maps)

A comparison between states with low vaccination coverage rates and those reporting higher numbers of whooping cough cases shows some, though not consistent, overlap. (Read more)
Written by Amy Wilson Posted at 10/26/2012 03:49:00 PM

In my family, 2 babies died within hours of their first vaccinations, one on each side of the family. Vaccines kill, it just usually gets reported as SIDS. No wonder people don't want vaccines any more. Many countries in Europe have reduced or ended their vaccine requirements because of problems with vaccine injury and death. Why does the US have the National Vaccine Injury Compensation Program? Because so many people were getting large jury awards from the vaccine manufacturers after their children were damaged or killed. The NVIC which is difficult to get a claim accepted by, gives the family a one time pittance payment to raise a special needs child that has been vaccine damaged. The money they offer will never cover the cost of raising a disabled child. No wonder people don't want their kids vaccinated anymore.