South Dakota journalists praise McGovern, who was shaped by his rural roots and returned to them 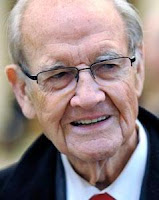 George McGovern, who died as he marked his 40th anniversary as the Democratic nominee for president, was shaped by his rural roots, but unlike many politicians who climbed the national pinnacle, he returned to them, notes political reporter Chuck Raasch of USA Today, who got to know McGovern long ago in their native South Dakota. (USAT photo)

"Rarely was a politician so shaped by the geography of his upbringing," Raasch writes. "It is why, I think, after he left public office that he took a largely untrodden path back to South Dakota to live part-time. A lot of politicians never come home once they’ve left public office. The allure of Mitchell was never something he was ashamed of, even when other politicians or the pressies covering him would crack jokes about the Corn Palace," Mitchell's other claim to fame. "It was there, growing up in the dust and the suffering of the Great Depression, that this son of a Methodist minister was grounded in the knowledge that there are many things bigger than you in this great big world, but that knowledge is never an excuse for not trying to make that world better." (Read more)

Seth Tupper, editor of The Daily Republic in Mitchell, writes that McGovern's "popular image . . . is that of a hopeless liberal, too radical to win even his home state in the 1972 presidential election.
That image, while lasting, is only a caricature. His was a life of puzzling contradictions that made him, like most legendary politicians, nearly impossible to define. . . . He was born and raised in what many Americans consider the middle of nowhere. Yet, in rapid succession, he rose to become a debate champion, pilot, war hero, college graduate, doctor of history, college professor, director of the South Dakota Democratic Party, congressman, director of Food for Peace, senator, Democratic presidential nominee, ambassador, Medal of Freedom recipient and author. Among South Dakotans, few if any can be called more accomplished." (Read more)

"The worldview that George McGovern brought to more than half a century of public life was shaped by witnessing privation on the farm during the Great Depression and hunger in Italy during his service as a decorated bomber pilot in World War II," writes Jim Webster in Agri-Pulse. Webster was on the staff of McGovern's 1968 Senate and 1972 presidential campaigns, where he was head of Rural Americans for McGovern-Shriver. Webster says McGovern's "Real legacy is his contribution to food and nutrition policy, especially overseas food aid and agricultural development." Agri-Pulse is available by subscription only, but a free trial can be found here.
Written by Al Cross Posted at 10/22/2012 02:47:00 PM