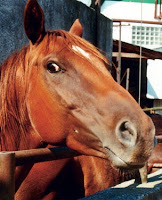 The sale of U.S. horsemeat to Europe via Canada and Mexico was halted by the European Union, then lifted, but tighter regulation is in the works. The International Equine Business Association's Sue Wallis, a horse-slaughter advocate, told Julie Harker of Brownfield Agriculture News that the suspension could have had "troubling consequences" had it not been ended. (Photo by Kelly Kruszewski)

Earlier this month, the EU notified Mexican and Canadian horsemeat plants they couldn't export to Europe unless the horses had been in the country where they were slaughtered for a minimum of 90 days. "Within three months, we would have had some 48,000 head of horses with nowhere to go," Wallis told Harker.

Cheryl Hanna of Examiner.com reported the suspension was announced one day after the release of a European Commission Directorate General for Health and Consumers report saying "Veterinary records for horses are 'insufficient' to guarantee health standards relating to the European Union's concerns about U.S. horses' medication histories." The EU will require lifetime medication records for slaughtered horses by July 31, 2013, she reports.
Written by Ivy Brashear Posted at 10/25/2012 12:20:00 PM