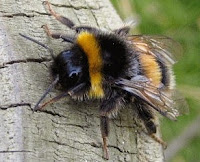 A new study shows that agricultural pesticide use is killing worker bumblebees and impairing their ability to gather food, which means colonies vital for plant pollination are more likely to fail where pesticides are used. The British study was published in Nature this week.

Scientists exposed colonies of bumblebees to the pesticides neonicotinoid and pyrethroid over four weeks at levels similar to what they would experience in the field. "Chronic exposure ... impairs natural foraging behavior and increases worker mortality, leading to significant reductions in brood development and colony success," the University of London study concluded.

The United Nations estimates that a third of all plant-based food depends on bee pollination, Alister Doyle of Reuters notes. A 2011 UN report estimated that bees and other pollinators do work that is worth $200 billion a year, and they have been declining in several countries. The study's findings "underscored the importance of wider testing of pesticides" to make sure they won't harm bees, Doyle reports.
Written by Ivy Brashear Posted at 10/22/2012 01:22:00 PM