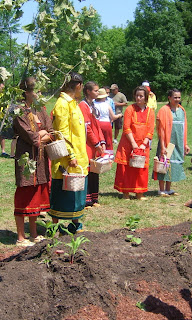 "For decades, indigenous people in the United States and Canada have been burdened with health problems linked to environmental pollutants," Brian Bienkowski of Environmental Health News reports. "But that isn’t their only sacrifice: Pollution is crippling some tribes’ culture, too." Native foods, water, medicines, language, ceremonies, traditional hunting and fishing techniques have all been jeopardized by pollutants and development. When native people lose those vital aspects of their lives, Bienkowski writes, "their identity is lost, too." (EHN photo by Elizabeth Hoover: Mohawk girls attend garden ceremony. Soil contamination is discouraging gardening, EHN reports.)

The Anishinaabe Tribe lives on the Aamjiwnaang reservation east of Michigan's "thumb" across the St. Clair River near Sarnia, Ontario. The area is known as Chemical Valley because it's home to 62 industrial facilities, about 40 percent of Canada's chemical industry. Benzene, cadmium, formaldehyde and lead "permeate the reservation," Bienkowski writes. The tribe considers the cedar tree sacred. They use it medicine, teas and in ceremonies. But when a private lab found elevated levels of cadmium in reservation cedars in 2006, the tribe stopped using them to evoke their cultural traditions.

The St. Lawrence River runs through the Mohawk Nation at Akwesasne, also in southern Ontario, on its way to the Atlantic Ocean, and has provided the tribe with water, food and identity for centuries, Bienkowski reports. In the early 1980s, the river was polluted with polychlorinated biphenyls, PCBs, from upstream aluminum foundries, contaminating the water, fish and people. "But there's an impact that blood tests can't measure," Bienkowski writes. "The relationships and experiences that took place on the river are now endangered as the community avoids it out of fear."

The Tewa Pueblo in New Mexico are dealing with contamination from uranium mining. "Animals have died off or left, the water is no good. This is not the world that we know and rely on," tribe member Kathy Sanchez told Bienkowski. "It's contaminated our culture."

The Yu'pik on Alaska's St. Lawrence Island have blood levels of PCB about four times higher than the U.S. average, through marine mammals that are essential to their diet and culture. (PCBs accumulate up the food chain.) "It's not an option to change our diet," Vi Waghiyi, tribe member and director of Alaska Community Action on Toxins. "But the joy of a successful hunt and sharing the food has been replaced with people wondering, will this harm my family?" (Read more)
Written by Ivy Brashear Posted at 10/25/2012 12:02:00 PM