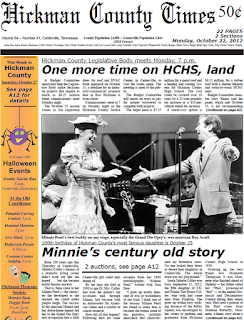 Last week, with an item about a newcomers' feature in the Hickman County Times of Centerville, Tenn., we ran a photo of the model of a statue of Minnie Pearl, to be placed at the old courthouse in her native county. Today would have been the rural comedian's 100th birthday, and the Times noted it in this week's paper, with a story about how Sarah Ophelia Colley Cannon became Minnie Pearl of Grinders Switch, and a photo of her with Roy Acuff at the Grand Ole Opry.

The paper also promoted two auctions being held in conjunction with the anniversary, to raise money for the statue (which would replace one removed by a dissatisfied donor) and make the courthouse a cultural arts center. A radio auction on KIX-96 FM runs until 8 p.m. CDT. To get a list of items and make a bid, call 931-729-2900. Also ending tonight is The Pearl On-Line Art Auction, with 160 items created by local artists. For details, go to www.ThePearlAuction.com.
Written by Al Cross Posted at 10/25/2012 11:56:00 AM