Nominations sought for Gish Award for courage, integrity and tenacity in rural journalism

The Institute for Rural Journalism and Community Issues, publisher of The Rural Blog, seeks nominations for this year’s Tom and Pat Gish Award for courage, tenacity and integrity in rural journalism. The deadline was today, but has been extended to next Friday, Nov. 8. 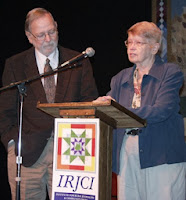 The award is named for Tom and Pat Gish, right, who published The Mountain Eagle in Whitesburg, Ky., for more than 51 years. Tom died in 2008; Pat has health issues but remains publisher, and their son Ben is editor. The Gishes have withstood advertiser boycotts, business competition, declining population, personal attacks, and even the burning of their office to give their readers the kind of journalism often lacking in rural areas.

Tom and Pat Gish were the first winners of the award named for them. Other winners have been the Ezzell family of The Canadian (Tex.) Record; James E. Prince III and Stanley Dearman, current and former publishers of The Neshoba Democrat of  Philadelphia, Miss.; Samantha Swindler, editor and publisher of the Headlight Herald in Tillamook, Ore., for her work as editor of the Corbin, Ky., Times-Tribune and managing editor of the Jacksonville (Tex.) Daily Progress; Stanley Nelson and the Concordia Sentinel of Ferriday, La.; and for 2012, Jonathan and Susan Austin of the Yancey County News in Burnsville, N.C.  All have shown courage, tenacity and integrity in pursuing difficult stories. For more about them, click here.


The Institute seeks nominations that measure up, at least in major respects, to the records of previous winners. Nominators should send detailed letters to Director Al Cross, explaining how their nominees show the kind of exemplary courage, tenacity and integrity that the Gishes demonstrated in their rigorous pursuit of rural journalism. Documentation does not have to accompany the nomination, but is helpful in choosing finalists, and additional documentation may be requested or required. Questions may be directed to Cross at 859-257-3744 or al.cross@uky.edu. Letters should be postmarked by Oct. 31 and mailed to: Institute for Rural Journalism and Community Issues, 122 Grehan Journalism Building, University of Kentucky, Lexington KY 40506-0042.
Written by Al Cross Posted at 10/31/2013 01:04:00 PM