Coal-mine deaths are on pace to set a record-low year, but health issues remain a major concern

While health concerns remain about dust that leads to black-lung disease, U.S. coal mines are on pace to have a record year in terms of fatalities, reports The Associated Press. There have been 15 coal-related deaths in the U.S. this year. The record-low was 19 in 2009, the lowest among records that date back to 1900. The number of deaths in each of the past two years was 20.

Only last week did the No. 3 coal state, Kentucky, have its first underground-mine death of the year. One surface miner has also died. Industry officials say the lower number of deaths are a result of an increased awareness about safety, while others cite closing of mines in Appalachia. Still, of this year's 15 deaths, have been are in Appalachia.  (Centers for Disease Control graphic; click it to enlarge) 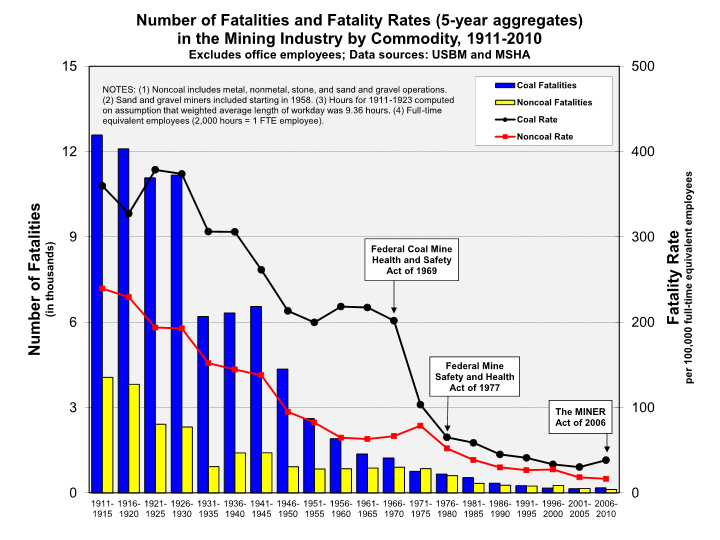 "Federal mine safety officials credit changes they’ve made since the Upper Big Branch disaster in April 2010," Dylan Lovan writes for AP. "They point to their more aggressive use of team inspections at problem sites and other measures, which they say have fostered more responsible behavior below ground." Assistant Labor Secretary Joseph Main, who heads the Mine Safety and Health Administration, told Lovan, “I do think we’re seeing a cultural change in the mining industry that’s for the better."

Retiring Rep. George Miller (D-Calif.), a longtime mine-safety advocate on the House Education and Labor Committee, "said MSHA needs even stronger tools to investigate and punish mine operators," Lovan reports. "Miller has sponsored a bill to give the agency subpoena power during an investigation or inspection, increase criminal penalties for safety violations, and punish operators who don’t pay fines. The bill is stuck in a House committee."

While fewer coal workers are suffering fatal accidents, more are reporting health issues. Experts at the National Institute for Occupational Safety and Health reported that by 2012, the rate of severe coal workers' pneumoconosis (black lung) had reached 3.2 percent of miners in the Central Appalachian coalfield of southern West Virginia and Eastern Kentucky, Ken Ward reports for the Charleston Gazette: "That’s a nearly tenfold increase over the disease prevalence 15 years earlier—a shocking statistic." Another NIOSH study said that the most severe form of black lung disease is on the rise.

More than 1,100 miners were wrongly denied black lung claims after the doctor at Johns Hopkins Medical Institutions in Baltimore who interprets X-rays in black-lung claims failed to find a single case of severe black lung in more than 1,500 cases decided since 2000 in which he offered an opinion.
Written by Tim Mandell Posted at 12/22/2014 12:35:00 PM