In a small Northern California community that relies heavily on agriculture, high-school students are learning job skills to prepare them for a future beyond graduation. Winters High School's 500 students—about two-thirds are Hispanic—take part in career academies that include agriculture, engineering and culinary science, Deborah Fallows reports for The Atlantic. About half of the students are enrolled in agriculture. (Best Places map)

Agriculture classes "include a vast array of options, from an intro course in the history, economics, and production of California agriculture, to courses on ag business and management, farm practices and operations, including machinery operations and management, animal and plant science, all kinds of shop offerings, FFA participation, which includes public speaking, report writing, and parliamentary procedure, and agriculture leadership training," Fallows writes. "And floriculture, in which students are already doing arrangements for a local business Christmas party." 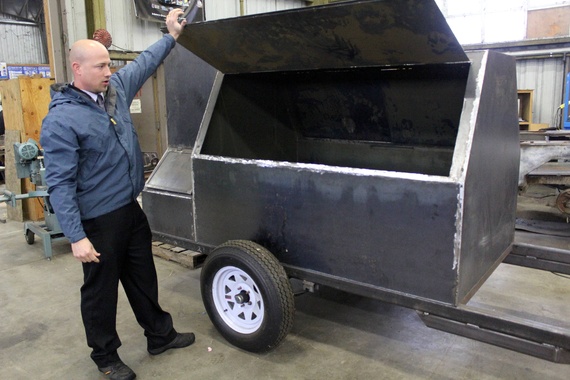 At the off-campus ag site students "grow tomatoes, pumpkins, and ryegrass, grapes, almonds, peaches, and plums," Fallows writes. "Next year, with the help and guidance of local farmers, they are planning to start an almond orchard." Students also learn to weld and use computer aided design systems to make metal items, such as industrial-size barbeque smokers, fire pits, outdoor metal house decorations, coolers made from wine barrels and lighting for the school football field. (Atlantic photo: Principal Paul Fawcett with a student-made barbecue)

"Compared with those at nearly every other school I have visited, Winters students showed a distinct absence of college-admission mania and stress," Fallows writes. "Principal Paul Fawcett told me they reached their 100 percent goal last year for every senior to make plans for post-graduation. Many go to some of the many campuses in California's three-tiered system: the University of California campuses, the Cal State system, or the state community colleges. Some go into the military, and a few go out of state, including to Ivy League schools." (Read more)
Written by Tim Mandell Posted at 12/22/2014 09:42:00 AM