States step up incentives to attract young lawyers to rural areas, where they are often scarce

It's hard to find a lawyer when you need one in many rural areas. That lack of rural lawyers is forcing some states to think outside the box to draw young professional to their towns, reports Regina Garcia Cano for The Associated Press. 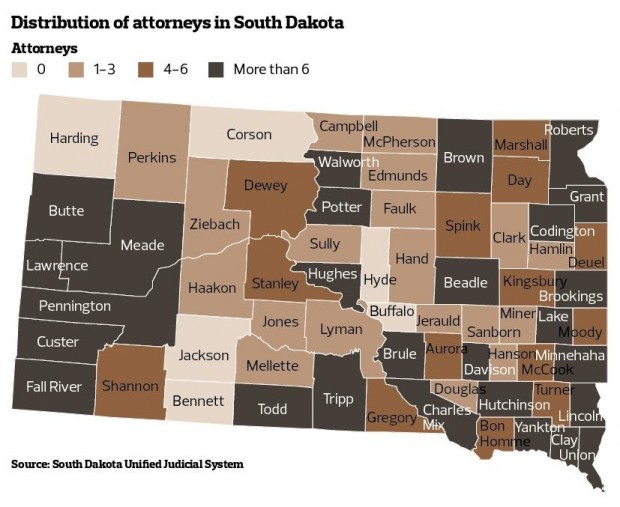 In South Dakota, four urban areas have 65 percent of the state's lawyers, while in Nebraska, 12 of the state's 93 counties don't have a practicing attorney, Cano writes. "Only about 30 percent of Georgia's attorneys can be found outside the Atlanta area. And even in New York with nearly 170,000 attorneys, more than 60 percent concentrate in New York City." (Rapid City Journal map from 2013)

South Dakota has started a program believed to the first of its kind that compensates lawyers much the way that similar programs do for doctors that relocate to rural areas, Cano writes. The program, funded by the state's judicial system, the South Dakota Bar Association and the counties, "offers an annual subsidy of $12,000 or 90 percent of the cost of a year at the University of South Dakota Law School to live and practice in rural communities."

Other states are following suit with programs to help draw lawyers to rural areas, Cano writes. "Nebraska next year will begin repaying loans for law school graduates who commit to serving at least three years in underserved communities in the state. The state bar also is teaming with two law schools to offer summer clerkships at rural firms. And Legal Aid of Arkansas recently received a $15,000 grant from the American Bar Association to fund fellowships for newly admitted lawyers who serve in rural areas for one year." (Read more)
Written by Tim Mandell Posted at 12/23/2014 12:15:00 PM