Rural areas, women have been under-represented in debates about net neutrality, study finds

Most Americans favor Internet neutrality, and the news media have played the issue as a technical and political story and largely ignored its potential impact on rural communities, says a report by the John S. and James L. Knight Foundation. The report says the debate has over-represented male and urban voices—especially through social media—while telecom and cable companies have put most their money and efforts into lobbying and have strayed away from most social media.

The report was conducted by analyzing more than 35,000 news sources and 300,000 blogs from January to July 2014; Twitter analysis of 120,000 tweets with #NetNeutrality from July to August 2014 and from #InternetSlowdownDay; of about 1 million public comments to the Federal Communications Commission; lobbying analysis of approximately 2,500 filings from 2009 to the second quarter of 2014 from the U.S. Senate Lobbying Disclosure Act Database and grant funding analysis of data for media access and telecommunications companies. (Knight Foundation graphic; click it to enlarge) 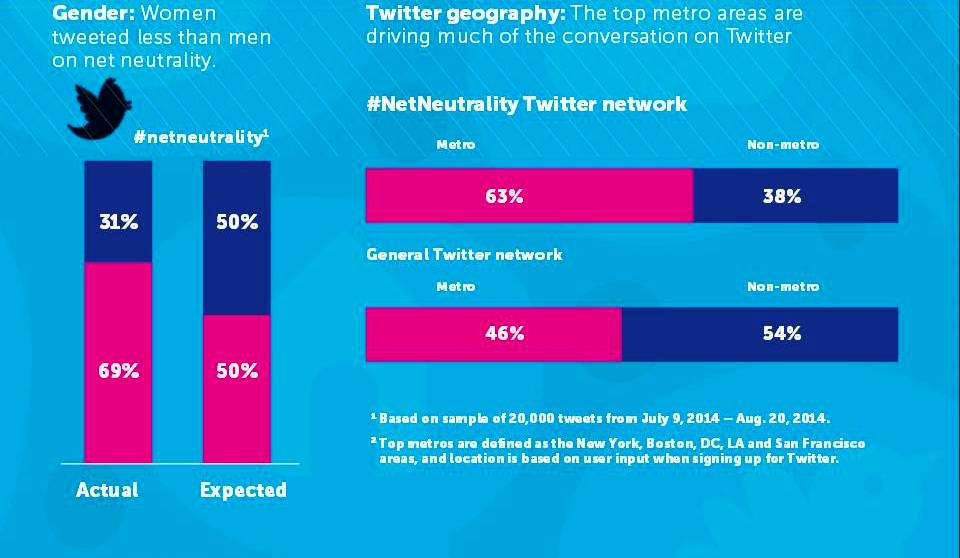 The report echoes a survey released last month by the University of Delaware's Center for Political Communication that found that most Americans favor net neutrality, as does President Obama. The FCC is debating what to do.
Written by Tim Mandell Posted at 12/23/2014 01:08:00 PM