EPA rules on coal ash don't treat it as a hazardous material, rely on citizens to report violations 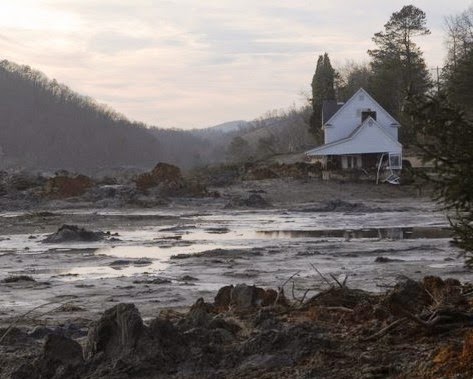 The Environmental Protection Agency's long-awaited rules on coal-ash disposal, written in response to a huge ash spill in Tennessee in 2008 (photo), fell short of advocate' hopes.

EPA "declined to designate coal ash a hazardous material, but said power plants would have to meet certain minimum structural standards for landfills and disposal ponds, and monitor them for leaks," Emmarie Huetteman reports for The New York Times. "If a breach is discovered, it will be the utility company’s responsibility to reinforce or close the pond. New ponds and landfills will have to be lined to provide a barrier against leaks. Controls must be used to prevent people from breathing in coal ash dust."

"Power plants will also have to report the results of their inspections on a public website," Huetteman writes. "The rule provides little oversight, leaving it to citizens and the states to sue if power plants are suspected of not adhering to the EPA’s guidelines."

James Bruggers, environmental writer for The Courier-Journal in Louisville, writes that the rules "put a lot of new requirements on utilities to monitor ash ponds and landfills and make sure they are engineered and maintained properly. But there are no requirements that either state or federal regulators actually enforce them. Instead, the only guaranteed enforcement mechanism is through lawsuits filed by citizens, state and EPA officials acknowledged."


Electric-utility companies and the coal industry celebrated the decision. Thomas H. Adams, executive director of the American Coal Ash Association, told Huetteman, “This stuff is just as safe as we thought it was before the rule-making started, and it’s time to keep that growth going."

Advocates for stronger rules were disappointed. Frank Holleman, a lawyer with the Southern Environmental Law Center, said in a statement: “As we’ve seen over the past six years, irresponsible storage of coal ash by big utilities has caused unprecedented disasters and threatened the health and safety of Americans around the country. While there are some new tools for addressing our nation’s coal ash problem in these new federal protections, there are glaring flaws in the EPA’s approach.” (Read more)
Written by Tim Mandell Posted at 12/22/2014 11:22:00 AM