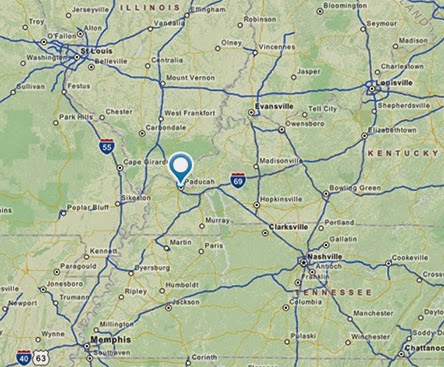 A big part of a newspaper's job is to hold up a mirror to its community, to make it confront its problems. Too many newspapers aren't willing to do that often enough, but since Steve Wilson became editor of The Paducah Sun last February, he has been doing it. One of his latest examples was a column in which he followed up on a Sun story reporting that the city of 25,000 (MapQuest image), unlike other major towns in Western Kentucky, is losing population.

"In the weeks since that story was published, I've asked many people in the community how they would account for it and heard a variety of explanations. Most people believe several factors play a role," Wilson wrote. The list included "'a small-town mentality'" that seldom thinks very big and resists looking honestly at the city's weaknesses and addressing them; lack of take-charge civic leadership in both local government and the local business community; [and] inadequate cooperation between city and county government and too few public-private partnerships."

The local chamber of commerce is planning a "visioning program" to guide the community's future, but Wilson said a similar program was "short on follow-through and did not have major impact." He concluded, "The city needs a sharper sense of where it's headed and how to get there. It also needs some smart, savvy people to step up and lead. Otherwise, there's not much reason to think the city's population won't continue to slide along with its economic vitality and quality of life."

The Paxton Media Group, the Paducah-based, family owned chain that owns the Sun, is lucky to have Wilson as the paper's executive editor. He was a columnist and deputy managing editor at The Arizona Republic and managing editor of the St. Paul Pioneer Press, where he directed a project that won the paper's first Pulitzer Prize. His column is behind the Sun's paywall, but he has allowed us to post it, here.

UPDATE, May 28: Sun Editor Jim Paxton writes in an editorial that when "Wilson first started raising the issue in columns last year, we were surprised by the intensity of the reactions from local officials past and present. Some accused Wilson of being a carpetbagger who was just seeking to accentuate the negative. But it is the role of community newspapers to provoke discussion, sometimes on topics that are not to everyone's liking but important nonetheless." (Read more)
Written by Al Cross Posted at 12/26/2014 04:09:00 PM