How did pro-marijuana advocates help eight small towns in Michigan win primary and general election measures to legalize marijuana? By thinking small in order to get big results, reports CQ Roll Call. It requires 250,000 signatures to get a statewide referendum on the ballot at an estimated cost of $1 million in campaign financing. "Advocates say that statewide support in Michigan, which is home to nearly 10 million people, needs to poll close to 60 percent to attract well-financed backers. And those polling numbers, they say, are simply not there yet," hovering around 50 percent.

So, advocates strayed away from a statewide push and concentrated on small towns, reports CQ. "Michigan law allows an initiative to be put on the ballot in individual cities by obtaining signatures from 5 percent of registered voters. While this is a tall order in a large city with hundreds of thousands of residents, it is far more achievable in smaller municipalities."

The cause concentrated on 11 towns, using 70 volunteers and a campaign budget of $12,000, mostly to cover legal expenses and fees associated with getting on the ballot, to promote legalizing marijuana at the local level, reports CQ. Tim Beck, chairman of the Safer Michigan Coalition, told CQ, “The political class is not as deeply threatened by local ballot initiatives as they are with state [initiatives]. We have no interest whatsoever to attempt a statewide initiative unless we run very well in the polls." (CQ graphic) 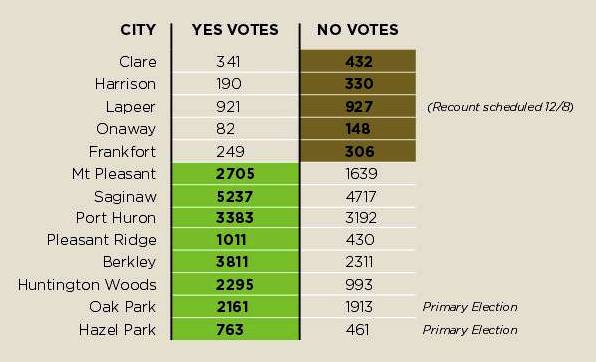 The eight towns succeeded, in large part, because they avoided outside interests and lobbyists and kept the issue local, reports CQ.  Gerry Gunster, a veteran issue advocacy professional and CEO of Goddard Gunster in Washington, told CQ, “If you want to convince voters that decriminalizing marijuana is in their best interests, you have to explain how the issue will impact them at a local, personal level. When we’re talking about local initiatives and referenda of any kind, connecting with the self-interests of voters often means making your issue feel tangible to the voter.”

While the strategy takes patience it has mostly worked, reports CQ. "Pro-marijuana advocates have helped to install legalization and decriminalization laws in 17 cities and towns across Michigan since 2011. In fact, until this year, they had not posted any losses in municipalities." (Read more)
Written by Tim Mandell Posted at 3/02/2015 02:44:00 PM