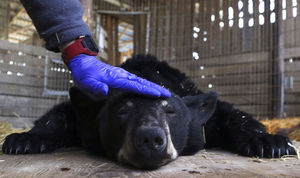 No matter where you are in Virginia, you're in bear country. Virginia is home to 17,000 black bears, found in nearly every county in the state, Tonia Moxley reports for The Roanoke Times. Because black bears live for about 25 years in the wild and females produce one to four cubs every other year, it's not uncommon to see bears in residential areas. From September 2013 to September 2014 the Virginia Wildlife Hotline received 8,485 calls, 1,437 of them—17 percent—for black bears. (Times photo by Matt Gentry: A tranquilized black bear is weighed at Virginia Tech’s Bear Research Center)

That could present a problem for concerned citizens weary of an encounter with a bear. The Virginia Tech University Bear Research Center receives between $30,000 to $50,000 per year, mostly from the Virginia Department of Game and Inland Fisheries, to study bears, Moxley writes. "The center, which opened in the late 1980s, is the only such facility in the state. Game officials trap bears in the fall as they forage to build up fat for winter hibernation and bring them to the center for study."

"With more than 20 years of bear blood samples in the freezer and reams of data from research projects, the center is a cache of scientific information about Virginia’s largest mammal, which by the turn of the 20th century had nearly been hunted to extinction," Moxley writes. "Besides the scientific research done with the hibernating bears, 'one of the major benefits for us . . . is when we have orphans that show up in the spring, we can put the cubs in with the lactating females, and they will nurse them and raise them,' said Jaime Sajecki, DGIF bear project leader." (Read more)
Written by Tim Mandell Posted at 3/02/2015 02:44:00 PM