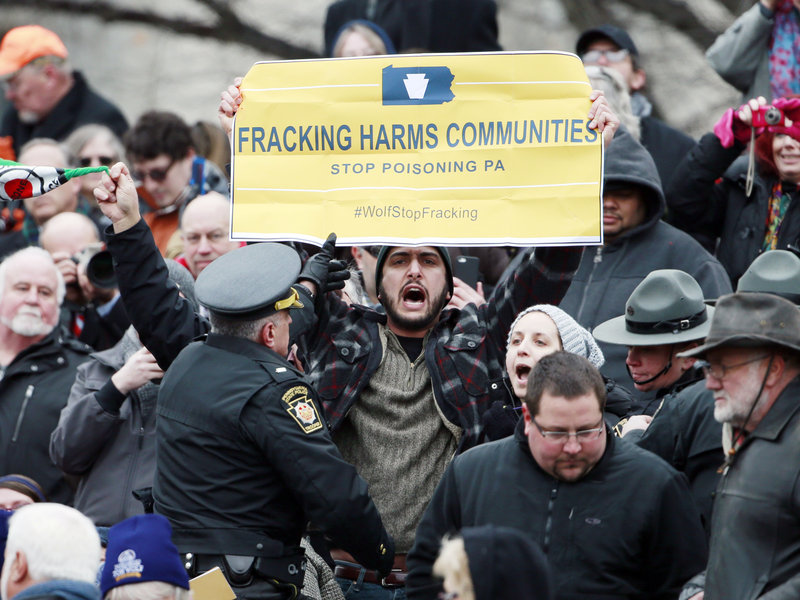 Anti-fracking activists say that the oil and gas industry is developing partnerships with local law enforcement to investigate and intimidate those won't don't like fracking, mostly "in drilling hotspots in Pennsylvania, Texas and the Rocky Mountains," Marie Cusick reports for NPR. (Associated Press photo by Matt Rourke: Anti-fracking protestors at the inauguration of Pennsylvania Gov. Tom Wolf)

The industry says they are just protecting their interests by keeping tabs on potential threats. But anti-fracking activists disagree, Cusick writes. Wendy Lee, an anti-fracking activist and philosophy professor at Bloomsburg University of Pennsylvania, said a state trooper visited her and asked her about eco-terrorism and pipe bombs in connection with an alleged trespassing incident. Lee said she visited a gas compressor in Pennsylvania but remained on public land and left when told to be by security guards. She told Cusick of the trooper's visit, "They're clearly there to send the message that they protect the industry."

The Pennsylvania trooper, Mike Hutson, declined to comment for the story, but an open records request revealed "that he is part of a broader intelligence-sharing network between the oil and gas industry and federal, state and local law enforcement called the Marcellus Shale Operators' Crime Committee," Cusick writes. Similar partnerships exist in Texas and the Rocky Mountains, and some of the biggest drilling companies work closely with FBI task forces to monitor potential threats.

Jim Beiver, a retired Pennsylvania State Police trooper who worked as an investigator, said people without criminal records can still turn to violence, Cusick writes. He told Cusick, "We always tried to maintain the balance of gathering information, doing our job and keeping in mind the rights of the people—keeping in mind the Constitution." But although there have been reports of pipe bombs, charred debris and gunshots fired at gas sites in Pennsylvania none of those incidents have been publicly linked to activists.

Not everyone is in agreement with Beiver's statements, Cusick writes. The anti-fracking group Gas Drilling Awareness Coalition "recently settled a lawsuit with the state after it was erroneously labeled a terrorist threat back in 2010." Paul Rossi, a lawyer for the organization, "says he's disturbed to hear about the surveillance." He told Cusick, "I'm about as flabbergasted as an attorney can be at the serial violations of First Amendment rights in this state." (Read more)
Written by Tim Mandell Posted at 3/03/2015 04:48:00 PM