The U.S. Department of Transportation today announced new rules for crude-oil trains, requiring all tank cars carrying ethanol and crude oil "to be phased out within seven years or retrofitted, and the new standards will start later this year for newly constructed railcars," Timothy Cama reports for The Hill. 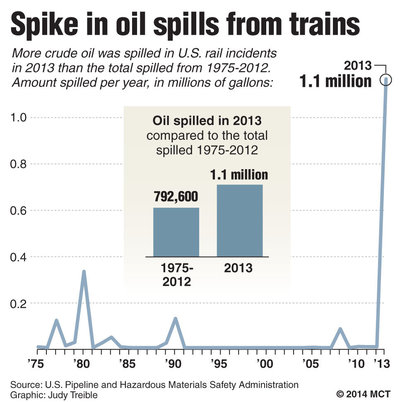 Transportation Secretary Anthony Foxx told reporters, "Our goal and what we accomplished is to create a comprehensive approach to safety that will prevent accidents from happening, that will mitigate damage if they do and support emergency response." He said the rule "significantly improves current regulations and requirements. It will make transporting flammable materials by rail safer than it is today."

While Foxx said 99.9 percent of shipments reach their destinations safely, there has been a recent rash of derailments. More oil was spilled from trains in the U.S. in 2013 than in the previous 37 years, and 47 people in Quebec died from the derailment of a train running from North Dakota to Maine. The oil boom in areas such as North Dakota and Texas has also led to a 4,000 percent increase in oil train shipments since 2008, Cama writes.

The American Petroleum Institute (API) said "it needed more time to review the final rules before passing judgement, but it welcomed the actions," Cama writes. API President Jack Gerard said in a statement: “As we review these rules, the key question is whether science and data show each change will make a meaningful improvement to safety." (Read more)
Written by Tim Mandell Posted at 5/01/2015 12:43:00 PM