Without migrant farmers, many small farms would be in trouble, Angela Oliver reports for The Messenger-Inquirer in Western Kentucky. More than 10 percent of H visas granted to migrant workers in the U.S. in 2012—65,345 out of 600,000—were for agricultural jobs. Kentucky has about 10,800 migrant workers on 1,400 farms.

"Many local farmers, like Keith Riney of Riney Farms, seek guidance from the Agriculture Workforce Management Association, which educates farmers on the H-2A visa program, acts as a liaison between the hiring farmers and government agencies and 'provides a voice for farmers on labor issues,' the group's website states," Oliver writes. "Through the federal program, employers can apply for nonimmigrant workers for any type of seasonal farm work for a maximum of 10 months. Local migrant workers are usually on the job from March or April to December."

Riney told Oliver, "Without extra people during the season, especially with the labor tobacco takes, our local industry wouldn't be as economically sound. We're able to gain larger incomes on smaller areas; we're able to grow more. [Migrant workers] have saved a lot of small farms." The Messenger-Inquirer, which is behind a paywall, can be accessed here. (USDA graphics) 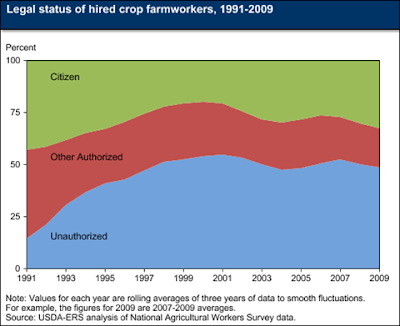 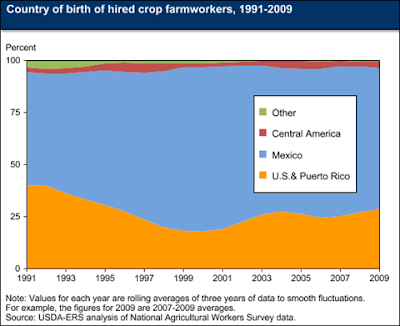 "Among migrant workers, the largest group are 'shuttlers,' who work at a single farm location more than 75 miles from home and may cross an international border to get there," states USDA. "They made up about 12 percent of hired crop farmworkers in 2007-09, down from about 24 percent in 1996-98. More common in the past, the 'follow the crop' migrant farm worker, who moves from state to state working on different crops as the seasons advance, is now a relative rarity. These workers make up just five percent of those surveyed by the NAWS in 2007-09, down from a high of 14 percent in 1992-94. The final category in the figure are the newcomers to farming, whose migration patterns have not yet been established." 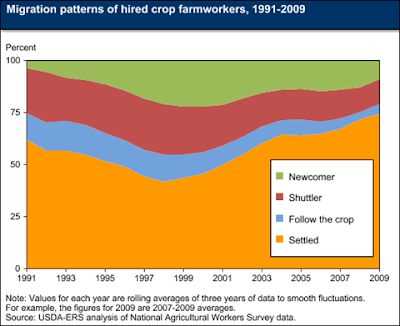