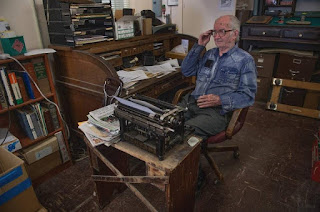 After nearly 70 years at the Winters Express in Northern California, 96-year-old publisher emeritus Newt Wallace, dubbed the "world's oldest paper boy," retired on Nov. 13. Wallace, who bought the newspaper in 1947, figured Friday the 13th "was a good time to file his last column after a working life that lasted longer than many people live," Hudson Sangree reports for The Sacramento Bee. Wallace told Sangree, "My body has outlived my mind. I can’t walk much anymore. I can’t hear. I can’t remember.” (Bee photo by Renée C. Byer: Newt Wallace)

Wallace, who for years enjoyed delivering papers in the community of 7,000, "delivered his last load of weekly papers by car (Nov. 11) to the rural Yolo County communities of Madison, Capay and Esparto," Sangree writes. "He addressed all the out-of-town papers to be mailed that day. Then he shuffled down to the Buckhorn Steakhouse and traded three newspapers for a beer—another of his longtime traditions."

"The Winters Express, circulation 2,000, started in 1884," Sangree writes. "Newt Wallace was born in 1919 and remembers his grandfather talking about fighting in the Civil War, his children said. Wallace graduated from Iowa State University and participated in ROTC, but the Army rejected him for service in World War II because of a heart condition that doctors worried might affect his longevity."

"Instead, he and his wife Ida Wallace moved around the country working as civilians on defense projects, including building the ALCAN Highway to Alaska," Sangree writes. "After the war, Wallace worked as an editor at small papers in Denison, Iowa and Upland before buying the Winters Express for $8,500 in 1947. At the time, Winters was known mainly for apricots. Hundreds of rail cars would leave the city loaded with the fruit each spring, Wallace said. Like many small-town publishers, he reported stories, sold ads, poured molten lead for type and delivered the paper himself. His wife and children worked alongside him."

"Newt Wallace and his children reckon he’s devoted the better part of 80 years to journalism," Sangree writes. "He started delivering papers when he was 10 in his native Oklahoma. Why did he work so long? 'I had nothing else to do,' he said. 'I don’t play golf. Besides, I enjoyed my work.'” Despite his long tenure, his retirement was being downplayed, mostly because many people don't see how he'll stay retired. His son Charley told Sangree, “I figure he’ll be back in two weeks." (Read more)
Written by Tim Mandell Posted at 11/24/2015 01:12:00 PM