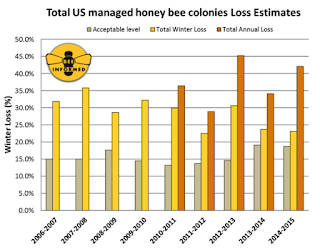 Honeybees could be in for a long, brutal winter, writes Dick Rogers, the principal scientist with the Bayer Bee Care Center in North Carolina. Since 2013, U.S. beekeepers have done a good job of reducing honey bee losses, mostly because of better management of the deadly Varroa mite, a parasite that attacks bees. But during hive evaluations this year, Rogers has found that "the vast majority of hives contained mite infestations well above the threshold level of concern."

Rogers, who said it only takes three Varroa mites per every 100 bees to put the hive in trouble, said a hive of 40,000 bees would have thousands of parasites, "which weaken bees through their feeding and disease transmission activities," he writes. "This year I’m finding at least two-thirds of the hives I’ve examined contain mite counts above that threshold and many have exceeded seven mites per 100 bees, a level that is almost certain to result in colony failure this winter . . . Recent scientific presentations at bee health conferences indicate that the U.S. Department of Agriculture is finding infestation levels up to eight mites per 100 bees this fall, which agrees with our own assessment. This does not bode well for honey bee colonies going into winter."

Honeybees populations are "responsible for more than $15 billion in increased crop value each year," Daniel Enoch reports for Agri-Pulse. "About one mouthful in three in our diet directly or indirectly benefits from honey bee pollination, the department says on its website, and commercial production of many specialty crops—like almonds and other tree nuts, berries, fruits and vegetables—depend on pollination by honey bees."

"The Varroa mite is one of several possible factors that scientists blame for Colony Collapse Disorder, a phenomenon that began about a decade ago in which overwintering honey bee populations experienced dramatic die-offs," Enoch writes. "Other possible factors include the increased use of potentially toxic insecticides, called neonicotinoids, as well as habitat loss. From 2006 through 2011, about a third of U.S. honey bee colonies were lost each year, USDA says, with a third of these losses attributed to CCD by beekeepers. The winter of 2011-2012 was an exception, when total losses dropped to 22 percent."
Written by Tim Mandell Posted at 11/23/2015 01:45:00 PM