War on heroin, once an urban battle, now being fought in rural white America

The war on heroin, once an urban plight that mostly afflicted African Americans, is now being fought in rural white America, Clyde Haberman reports for The New York Times. Over the past decade, 90 percent of first time heroin users were White, typically people who progressed to heroin from prescription pain reliever drugs such as OxyContin and Percocet. The main reason that users switch to heroin is that it's cheap and easy to get, with an estimated 333,000 heroin users now in the U.S. triple the number from a decade ago. It is also leading to more deaths, with overall heroin overdose death increasing 39 percent from 2012 to 2013 and the rate up four times since 1999. 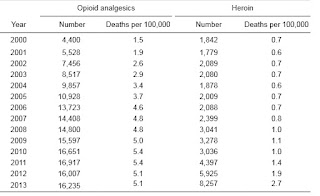 Attitudes have also changed from locking up users to making more of an effort to treat them, Haberman writes. "The Obama administration has significantly increased to about $12 billion, the federal budget for drug prevention and treatment. In the last few weeks, it granted early release to several thousand imprisoned drug offenders deemed nonviolent. Not everyone is thrilled with this. Some law enforcement officials predict that at least a few of the newly freed inmates will return to crime." (CDC graphic: U.S. heroin deaths)

Some activists say it's not a coincidence that there has been a shift from imprisonment to treatment as the drug has shifted from being used more by whites than blacks, Haberman writes. In any event, winning a war on drugs is a difficult task. Daniel Patrick Moynihan, a four-term U.S. senator from New York, who died in 2003, wrote an essay in 1998 on the 100th anniversary of heroin’s introduction: "Since the desire of man to alter his state of consciousness is as old as human history, and technology continues to provide a breathtaking array of drugs capable of producing everything from oblivion to nirvana, I think it safe to assume that we may never win a ‘war’ against drugs.” (Read more)
Written by Tim Mandell Posted at 11/23/2015 01:46:00 PM