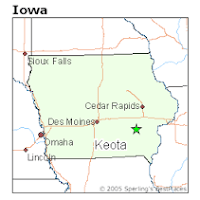 Three high school students in Keota, Iowa (Best Places map), launched a successful social-media campaign to urge Democratic presidential candidate Hillary Clinton to visit their town in the hopes of sparking a national conversation on the challenges facing rural schools, Samantha-Jo Roth reports for The Huffington Post. High school senior Megan Adam told Roth, "It’s a small town in the middle of nowhere. You look around and you see hog buildings, corn fields and bean fields, and that’s about it.”

The town has 1,000 residents and Keota High School, with a student body of 80, is in danger of closing. Even if the school stays open, it doesn't offer much for students. Abby Schulte, one of only 18 members of the school's Class of 2016, told Roth, "There’s not a lot of jobs in Keota because it’s mostly small businesses and farming. We don’t have a lot of things pulling people into our town besides our school.” Schulte "said budget cuts have hurt the quality of her education because many classes are only available online," Roth reports. She told Roth, "Our chemistry, anatomy, physics—all of that is online." 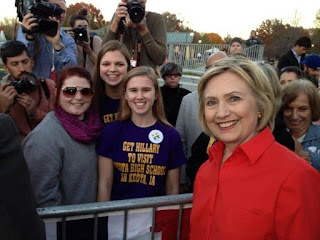 Sociology teacher Schuyler Snakenberg challenged Adam, Schulte and junior Kylea Tinneas "to find a way to improve the community, the state and the nation," Roth writes. "The students decided to capitalize on the upcoming Iowa caucuses, which have presidential hopefuls criss-crossing the state and visiting its 99 counties." Students "launched a Twitter account and corresponding hashtag in September called Keota Hopes For Hillary. They first encouraged their classmates to follow the account and use the hashtag, and then were able to connect with two campaign operatives with Hillary for Iowa." As of Tuesday the account had 1,300 followers. (Keota Hopes For Hillary photo: Abby Schulte, Megan Adam and Kylea Tinneas pose with Hillary Clinton on Nov. 3 in Coralville, Iowa)

On Nov. 3 students traveled to a Clinton event in Coralville, Iowa, where Adam was able ask Clinton, "What are your plans to help other rural schools in our same situation?” Roth writes. In her response Clinton said she would visit Keota and is expected some time next month for a town hall style event. Schulte told Roth, “I think it really demonstrates the democratic process. Such a huge political figure is coming to a school where there are only 80 kids in the high school to talk about her plans for improving society, answer our questions about the issues important to us.”
Written by Tim Mandell Posted at 11/25/2015 03:15:00 PM