In open range territory out West, where fences to keep livestock controlled are a rare sight, those unlucky enough to collide with livestock "are financially liable not only for their injuries and damage to their vehicles but also for the animal they strike," Bill Dentzer reports for the Idaho Statesman. In 2014 in Idaho, 1,100 accidents involved wildlife, compared to about 300 accidents involving domestic animals, according to the state Transportation Department. 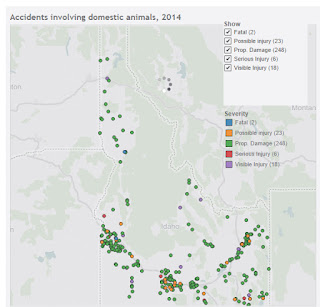 Holding drivers responsible for hitting livestock that are roaming free equates to a system still stuck in the Old West, some say, Dentzer writes. Ken Cole, Idaho director of the Western Watershed Project, an environmental group, told Dentzer, “That a rancher is not held liable for accidents that occur on highways in particular just seems kind of outdated and antiquated. These laws were written for a time that no longer exists.”

Open range laws have been pushed to the forefront again after police in Adams County shot and killed an Idaho rancher earlier this month during a dispute over a bull that was struck by a vehicle. State and county officials say the rancher's gun discharged, but the rancher's family claims he was murdered. The incident is under investigation by Idaho State Police.

Advocates of open range laws argue that "ranchers and farmers predate roads and cars, and the burden lies with motorists to remain vigilant for domestic animals, just as they would for wildlife," Dentzer writes. John Thompson of the Idaho Farm Bureau Federation told Dentzer, “If we never had an open range law, or if it had been abolished before that accident happened, nothing would be different today with regard to what happened."

"People seem to think that if you get rid of that law or have some other law, that says all livestock have to be fenced in, that that means livestock are never going to be out again—that’s just foolish," Thompson said. "You think about a bull that weighs 2,000 pounds—plus he’s going to go where he wants to go if he gets spooked or chased by something or whatever.”
Written by Tim Mandell Posted at 11/24/2015 01:12:00 PM