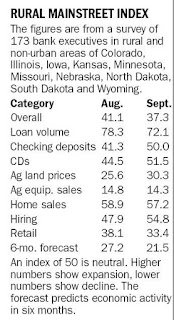 The September index was 37.3, down from 41.1 in August and 49 in September 2015, Jordon writes. With grain prices slumping, Goss said "Farm income is slated to drop by 12 percent from 2015, prompting 'an intense pessimistic outlook among bankers.' He said an expected 25 percent increase in government support payments this year won’t be enough to offset the reduced income."

"Of 173 bankers in 10 states who responded to Goss’s September survey, four out of five reported restructuring more farm loans to adjust to borrowers’ slimmer cash flow, and 1 out of 5 reported they are rejecting more ag loan applications," Jordon writes.
Written by Tim Mandell Posted at 9/16/2016 12:35:00 PM