Half of all guns in U.S. owned by 3% of population, says study 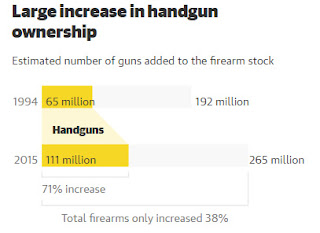 Nearly half of the 265 million guns in the U.S. are owned by three percent of the population, says an unpulished study by Harvard University and Northeastern University. Gun owners "tended to be white, male, conservative, and live in rural areas," Lois Beckett reports for The Guardian. The study found that gun ownership increased by 70 million since 1994, but the percentage of Americans who own guns has gone down from 25 percent to 22 percent. (Guardian graphic)

Researchers say the surge in gun ownership is fueled by fear, Beckett writes. Matthew Miller, of Northeastern, told Beckett, “The desire to own a gun for protection—there’s a disconnect between that and the decreasing rates of lethal violence in this country. It isn’t a response to actuarial reality."