Rural residents who use broadband are more likely to vote and even more likely to contact a public official, says a study by Oklahoma State University's Brian Whitacre and Jacob Manlove, published in the academic journal Community Development. The study, based on 50,000 respondents from the Census Bureau's 2011 Current Population Survey, found a "positive relationship between higher broadband and certain measures of engagement," Whitacre and Manlove write for the Daily Yonder. (Chart: Instances of voting in rural communities went up as broadband adoption increased) 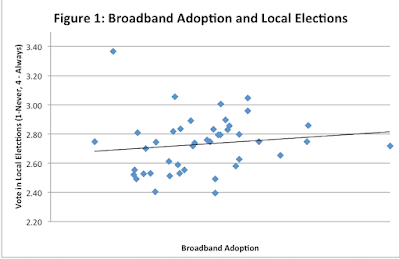 The study found that "as rates of rural broadband adoption increase, so do rates of voting in local elections, contacting local public officials, joining a neighborhood group and discussing politics with friends or family," Whitacre and Manlove write. "Interestingly, however, higher broadband adoption also meant less talking with neighbors, and less confidence in corporations. The number of community anchor institutions, meanwhile, was positively related to items like talking with neighbors, asking for favors from neighbors, and trusting people in neighborhoods." (Chart: Instances of contact public officials in rural communities went up as broadband adoption increased) 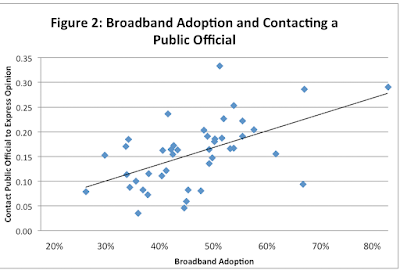 To account for other factors that affect civic engagement, such as education, income, race, and age, researchers ran an additional analysis using individual-level data that controlled for those factors, Whitacre and Manlove write. They "still found that broadband adoption had a significantly positive impact on several specific measures of civic engagement: contacting public officials, boycotting a company, joining a sports organization, becoming an officer in an organization, and discussing politics with family or friends."

"There were, however, negative relationships with seeing or hearing from friends, talking with neighbors, and confidence in corporations," Whitacre and Manlove write. "Perhaps most importantly, simple 'access' didn’t have much of an impact—demonstrating that getting people to actively use the technology is most important for getting them civically engaged." (Read more)
Written by Tim Mandell Posted at 9/22/2016 12:26:00 PM