At least 35 million eligible Americans are not registered to vote, Rebecca Beitsch reports for Stateline. Maps are available to compare voter registration in states in 2008, 2010, 2012 and 2014. (Stateline map: Voter registration by state in 2014) 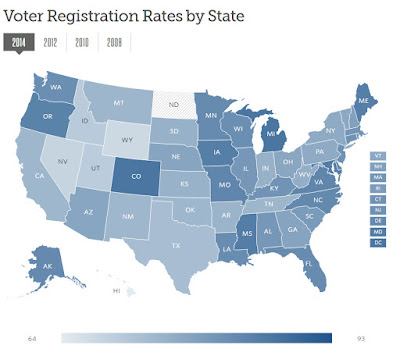 Hawaii has the lowest rate of eligible residents registered to vote, at 64 percent, followed by Wyoming (67.4 percent), Nevada (68.5) and Utah (69.9). One of the states with the highest numbers, Oregon (84.2 percent), in 2015 became the first state to add automatic registration, which registers people to vote when they apply for a license. Since the Oregon law went into effect more than 232,000 people have been automatically registered to vote, an increase of 10 percent, Beitsch reports. Others states, such as California, Connecticut, Vermont and West Virginia, have approved automatic registration.

"Under the federal Motor Voter Act, which went into effect in 1995, states must offer to register any eligible citizen who seeks a new driver’s license or public assistance," Beitsch writes. "But in many states, the law hasn’t fulfilled its potential, in part because the process often trips up would-be applicants and many state workers don’t consider it a high priority." Critics, such as New Jersey Republican Gov. Chris Christie," say connecting registration to driver’s licenses, which are available to people who are not U.S. citizens, opens the process to fraud."