The rural-urban political divide is creating two one-party nations, opines Lee Drutman, senior fellow at New America, in a column for The New York Times. "Most large cities, college towns, the Northeast and the West Coast are deep-blue Democratic. Ruby-red Republican strongholds take up most of the South, the Great Plains, the Mountain States and the suburban and rural areas in between."

"Rather than compete directly against each other, both parties increasingly occupy their separate territories, with diminishing overlap and disappearing common accountability," he writes. "They hear from very different constituents, with very different priorities. The minimal electoral incentives they do face all push toward nurturing, rather than bridging, those increasingly wide divisions." 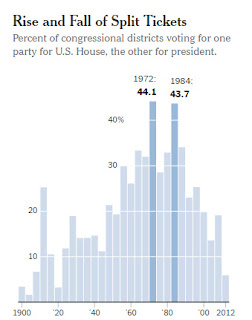 Those trends are true in the House, Senate and some state elections, where many races have been one-sided, Drutman writes. "These patterns are likely to continue: The current partisan geography is a natural political alignment. Around the world, urban areas tend to be left-leaning and cosmopolitan; rural and suburban areas tend to be conservative and populist." (NYT graphic)

"The deeper problem is that a system without much effective two-party competition is a system that pushes entirely in the opposite direction," he writes. "If a vast majority of seats are now safe for one party or the other, candidates don’t face any re-election incentive to reach out to the other party’s voters. Instead, they increasingly focus on the fear of a primary challenge. Especially on the right, this looming primary challenge (even if it is rare) means that members do not want to be seen as compromisers. This does not bode well for a functioning Congress." (Read more)
Written by Tim Mandell Posted at 9/22/2016 12:12:00 PM