The Appalachian Regional Commission has released a county-level map of the economic status of counties in the region for fiscal year 2017, which begins Oct. 1. The map designates the 420 counties as economically distressed, at-risk, transitional, competitive, or at economic "attainment." 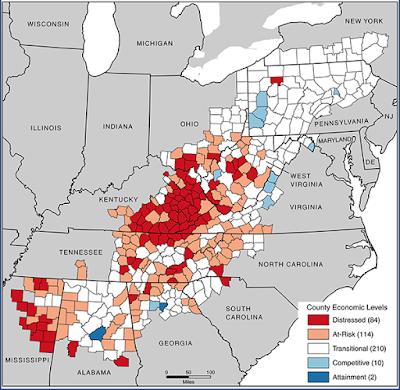 ARC said the map was built by "creating a national index of county economic status by comparing each county’s averages for unemployment, per capita market income, and poverty rate with national averages." It allows users to select any of the 13 states or 420 counties to get information on individual reports for county economic status, education, income, population, poverty and unemployment or to view all six topics. Reports date back to 2002.

ARC also has redesigned its Data Reports page to allow users to "easily search each Appalachian county’s economic status dating back 15 years or look at the poverty, education, income, population density, and other statistics at the county level in comparison to the rest of the state and the rest of the country," says the ARC website. "And we’ve also made a simple way to see how some of these key economic indicators have historically played out across the Region. This statistical treasure trove is the most comprehensive collection of data about Appalachia available."
Written by Al Cross Posted at 11/04/2016 10:57:00 AM