County-level interactive maps by The New York Times show the changes in the number of uninsured Americans since federal health reform took full effect in 2014. Nationally, there has been a 7 percent drop in uninsured adults, but many people in the South and Southwest still lack a reliable way to pay for health insurance, Margot Sanger-Katz and Quoctrung Bui report for the Times. "Many of the places with high uninsured rates had poor coverage before the Affordable Care Act passed," they write, and "tend to be states with widespread poverty and limited social safety nets." (Example of interactive map) 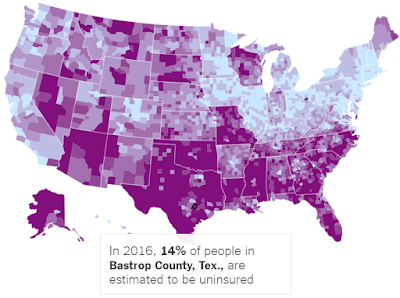 Most of the states with higher shares of uninsured residents refused to expand Medicaid under Obamacare, Sanger-Katz and Bui write. "It appears that Medicaid expansion has had a couple of effects: It provided a new coverage option for childless adults below or near the poverty line. It helped spur many people who were already eligible for the program to sign up. And it may have helped boost enrollment in Obamacare’s marketplace plans." (Maps show changes in percentage of uninsured in each county from 2013 to 2016) 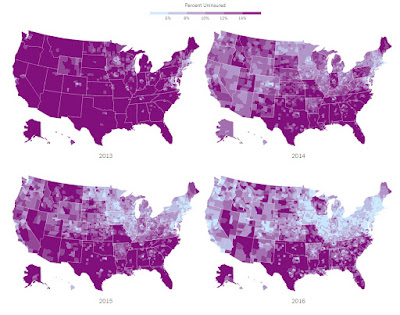