Rural Midwestern towns that have attracted many more immigrants—particularly Latinos—have been some of the biggest supporters of Donald Trump, Janet Adamy and Paul Overberg report for The Wall Street Journal. An analysis by the Journal found that "Among GOP voters in this year’s presidential primaries, counties that diversified rapidly were more likely to vote for the New York businessman."

That includes several areas in Iowa, Indiana, Wisconsin, Illinois and Minnesota that experienced some of the biggest increases in nonwhite residents from 2000 and 2015, Adamy and Overberg write. Trump, who has been openly against immigration and in favor of building a wall along the U.S.-Mexico border, is hitting the Midwest hard this week in the final days before the election. He was Eau Claire, Wis., last night, and Hillary Clinton running mate Tim Kaine was in Madison. (WSJ map: Change in diversity by county, 2000-2015) 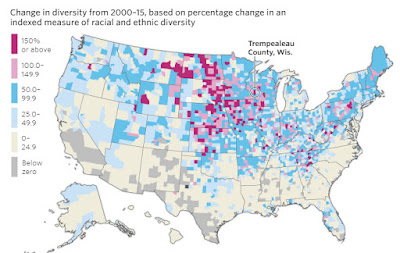 "The Journal identified the epicenter of this shift using the diversity index, a tool often used by social scientists and economists,"  Adamy and Overberg write. "It measures the chance that any two people in a county will have a different race or ethnicity. In 244 counties, that diversity index at least doubled between 2000 and 2015, and more than half those counties were in the cluster of five Midwestern states. The analysis excludes tiny counties that produce numeric aberrations." (WSJ map: Overall diversity in 2015) 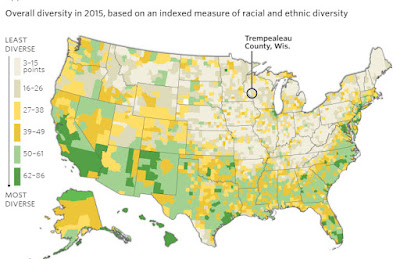 "In 88 percent of the rapidly diversifying counties, Latino population growth was the main driver," Adamy and Overberg write. "In about two-thirds of counties, newcomers helped expand the overall population. In the remaining third, the population fell despite an influx of new arrivals, which magnified the shift for locals as their peers died or moved away."