Voters in five states will cast ballots Nov. 8 on the legalization of recreational marijuana, while three states will vote on its medicinal use, Thomas Fuller reports for The New York Times. Arizona, California, Massachusetts, Maine and Nevada have ballot measures on recreational use. Polls indicate that measures will pass in California, Massachusetts and Maine, while Nevadans are evenly split on the issue. Arkansas, Montana and North Dakota voters will vote on medicinal use.

"The passage of recreational marijuana laws in Alaska, Colorado, Oregon and Washington over the past four years may have unlocked the door to eventual federal legalization," Fuller writes. "But a yes vote in California, which has an economy the size of a large industrial country’s, could blow the door open, experts say." Arcview Group, a company that links investors with cannabis companies, projects that if the measure passes in California the market for recreational and medicinal marijuana will grow from $7 billion this year to $22 billion in four years. (NYT map: Current marijuana laws and proposed measures) 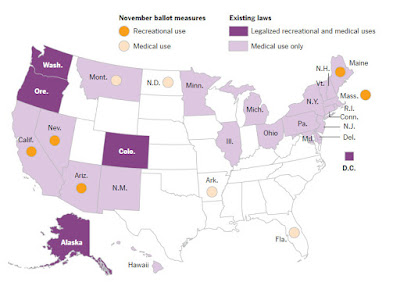 "And yet scholars who have studied these legalization measures say that to a large extent they are very much a shot in the dark, a vast public-health experiment that could involve states that hold 23 percent of the U.S. population—and generate a quarter of the country’s economic output—carried out with relatively little scientific research on the risks," Fuller writes.

A study published in The Journal of Clinical Psychiatry found that marijuana was more addictive than alcohol but less so than tobacco, Fuller writes. Lead author Jesse Cougle, from the psychology department at Florida State University, told Fuller, “The addictiveness of cannabis has been underestimated,” saying the findings “definitely contradicts a lot of opinions on the topic.” The study found among weekly users "a 25 percent risk of dependence for marijuana compared with 16 percent for alcohol and 67 percent for tobacco."
Written by Tim Mandell Posted at 11/02/2016 11:01:00 AM