Genetically modified crops have "not accelerated increases in crop yields or led to an overall reduction in the use of chemical pesticides," Danny Hakim reports for The New York Times. An Times analysis of United Nations data "showed that the U.S. and Canada have gained no discernible advantage in yields—food per acre—when measured against Western Europe, a region with comparably modernized agricultural producers like France and Germany." (NYT graphic: Herbicide use is on the rise in the U.S.) 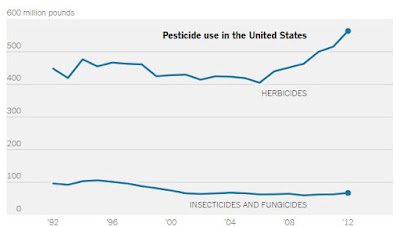 Also, a National Academy of Sciences report "found that 'there was little evidence' that the introduction of genetically modified crops in the U.S. had led to yield gains beyond those seen in conventional crops," Hakim writes. At the same time, herbicide use in the U.S. has increased, "even as major crops like corn, soybeans and cotton have been converted to modified varieties. And the U.S. has fallen behind Europe’s biggest producer, France, in reducing the overall use of pesticides, which includes both herbicides and insecticides." (NYT graphic: U.S. and Western Europe corn yields have remained similar, despite increased GMO use in the U.S.) 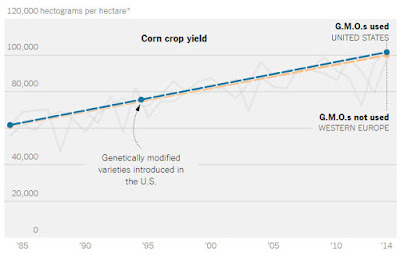 Since genetically modified varieties of corn, cotton and soybeans were introduced in the U.S. about 20 years ago, "The use of toxins that kill insects and fungi has fallen by a third, but the spraying of herbicides, which are used in much higher volumes, has risen by 21 percent," Hakim writes. "By contrast, in France, use of insecticides and fungicides has fallen by a far greater percentage—65 percent—and herbicide use has decreased by 36 percent."

Robert T. Fraley, chief technology officer at Monsanto, accused the Times of cherry-picking data to make the industry look bad. He told Hakim, “Every farmer is a smart businessperson, and a farmer is not going to pay for a technology if they don’t think it provides a major benefit. Biotech tools have clearly driven yield increases enormously." Monsanto said in a statement: “While overall herbicide use may be increasing in some areas where farmers are following best practices to manage emerging weed issues, farmers in other areas with different circumstances may have decreased or maintained their herbicide usage.” (Read more)
Written by Tim Mandell Posted at 10/31/2016 12:15:00 PM