Midwest farmers who borrowed heavily when crop prices were high, then had to borrow more when prices crashed, are now sinking deeper into debt and are unable to pay back loans, P.J. Huffstutter reports for Reuters. Called "go-go farmers" by economists and other growers, "their distress could foreshadow broader economic turmoil in the grain sector, which includes corn, soybeans and wheat." 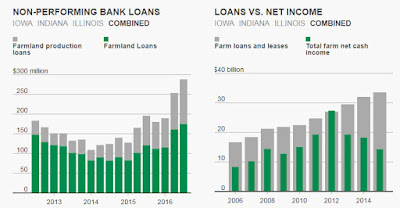 Among the top Midwest grain states, "The number of Chapter 12 filings, limited to those with less than $4.03 million in debt, were 51 percent higher in the 12-month period ending June 30 of this year compared to the same period in 2013, according to federal court data," Huffstutter writes. "In Iowa, the top corn producer, Chapter 12 filings climbed 125 percent." (Reuters graphic: Growing debt on U.S. farms)

Also, "the proportion of extremely leveraged grain and other row crop farmers in the U.S.—those with debts totaling more than 71 percent of assets—doubled, to 2.4 percent, between 2012 and 2015, according to the latest available USDA data," Huffstutter writes. "In all, about one in three U.S. farms raising grain and other row crops, not including cotton, last year were categorized by the Department [of Agriculture]as 'highly leveraged' or 'very highly leveraged,' meaning their debts equaled at least 41 percent of assets." (Read more)
Written by Tim Mandell Posted at 11/01/2016 01:00:00 PM