The number of soybean acres damaged by drift of a new form of Monsanto's dicamba herbicide has surpassed 3 million, according to estimates by state agriculture agencies for weed expert Kevin Bradley at the University of Missouri, who cautions, "We will likely not know the extent of dicamba damage until the end of the season."

Bradley issued maps showing the number of acres estimated to be damaged in each state, and the number of damage investigations in those and other states: 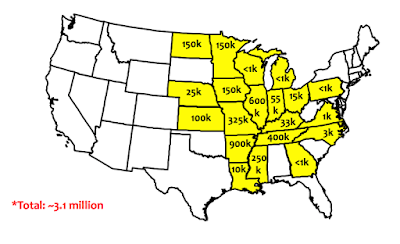 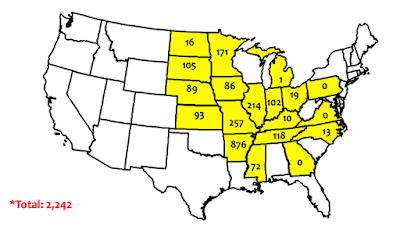 The dicamba debacle has left many farmers uncertain about what seeds to book for next year," reports Pam Smith, crop technology editor for DTN/The Progressive Farmer. Homer, Ill., farmer Jeremy Wolf, half of whose beans were damaged, told her, "My entire summer has been consumed by trying to determine exactly how my beans got damaged and how to respond to that. I've seriously considered planting all corn next year. I do not want to go through another year like this."
Written by Al Cross Posted at 8/19/2017 01:22:00 PM